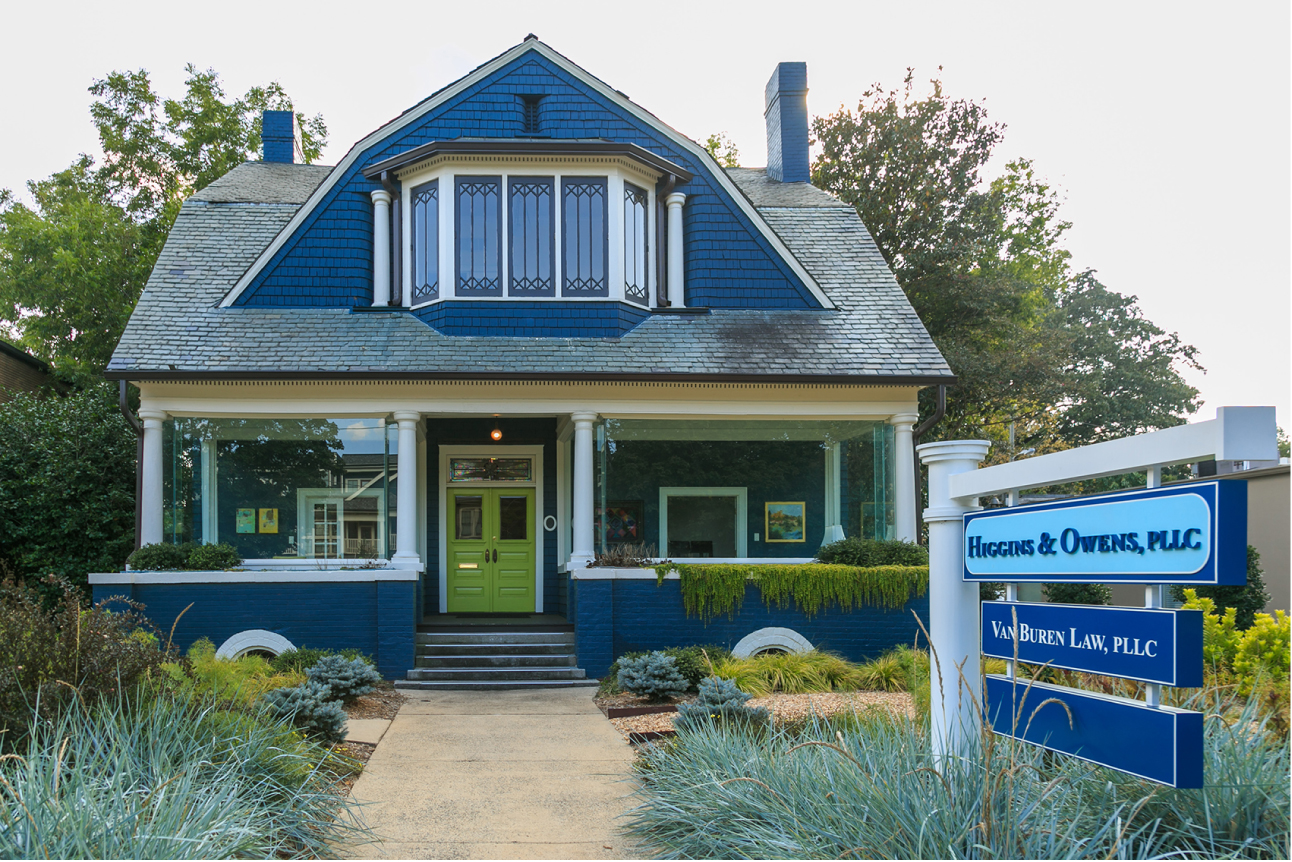 About the W.G. Rogers House

Higgins and Owens is based in the W.G. Rogers House, built in 1902 and now designated as a Charlotte Mecklenburg Historic Site. Noted Charlotte architect Willard G. Rogers designed the home and lived there with his wife, Eva Troy Rogers. Rogers later became a partner of C.C. Hook, with whom he went on to design some of Charlotte’s finest buildings, including the Masonic Temple, the original YWCA building, and the Van Landingham House. Eva Rogers was three-time president of the Charlotte Woman’s Club. Unfortunately, the Rogers lost their home in 1933 during the Great Depression.

The W.G. Rogers House is one of the earliest examples of the Dutch Colonial Revival style in Charlotte, and was noted as a “well-preserved example of upper middle class housing in turn-of-the-century Dilworth, Charlotte’s first streetcar suburb.” In 1940, it was sold to Mae King Blume, who purchased a number of Dilworth properties in the 1930s and 1940s, and was the proprietor of several Charlotte hotels. In 1982, Gary Benner and John Geer purchased the W.G. Rogers House, which by then had fallen into serious disrepair after years of use as a boarding house. Dr. Dan Morrill and the Charlotte-Mecklenburg Historic Landmarks Commission saved the house from destruction in 1984, the first residence in Mecklenburg County to benefit from the Commission’s work. The W.G. Rogers House was later owned by one of Charlotte’s premier architects, David Furman, and his wife Marilyn. It became home to Higgins & Owens in early 2016.

In January 1984, noted historian Dr. Thomas W. Hanchett, wrote this architectural description of the Rogers House:
The W.G. Rogers house is one of Charlotte’s earliest examples of the Dutch Colonial Revival architectural style. Built about 1902, the one and a half story dwelling features the barn-like gambrel roofs characteristic of the style. Rogers was among Charlotte’s first architects, and he incorporated many “state-of-the-art” architectural features in his residence which are worthy of note. The massing of the W.G. Rogers house is simple and straightforward, in keeping with the dislike for Victorian complexity which many young architects felt around the turn-of-the-century. It is basically a square box with no wings. The gambrel roof has a large gambrel-roofed front dormer, and a large shed-roofed rear dormer which extends all the way across the back of the house. The roof is slate with copper guttering. A pair of exterior end chimneys contribute to the symmetrical effect. Walls are sheathed in wood shingles. The double-hung sash windows each have a large single-pane lower sash, and an elaborately geometrical upper sash composed of four main vertical panes and as many as twenty-four smaller triangular panes. The front dormer features a dentilled cornice and a bay window flanked by Doric columns. In early years this bay was an open balcony, but soon after the house was built Rogers glassed it in. It has Doric columns set on a substantial brick railing wall, which is an extension of the brick main foundation of the house. A pair of round-arched openings at ground level containing fan lights provide natural illumination for the basement, and add an additional compositional element to the street facade. In the 1940s part of this porch was enclosed, and the front roof was extended slightly. The center entry has an elaborate transom of beveled glass over a pair of heavy wooden doors.

Inside, one moves through a small vestibule before entering the stairhall, which extends across the left front of the house. Next to the door, beneath the stair, is a Victorian inglenook. The stair rises in three flights. Its slender turned balusters are in the Colonial Revival style, but its unusual newel posts proclaim Rogers’ independence from strict interpretation of the style. The bullet-like wooden form of the main post is embellished with raised floral carving and a snake-like extension of the balustrade rail. The upper newel post has a cylindrical fluted shaft and a capstan top. The remainder of the interior lay-out shows the same eccentric mix of ideas found in the stair-hall. There is no center hallway, a feature used by many Colonial Revival architects, including Roger’s eventual partner C.C. Hook. Instead, rooms open one to another, somewhat in the Victorian manner. In the ceiling of the second floor hallway is a trapdoor to the attic. It contains a ladder that slides down on a system of pulleys, a noteworthy early example of the type of mass-produced ladder now common in suburban houses. The attic is unfinished. The yard of the W.G. Rogers house is rather compact, with narrow front and side yards. At the rear is a small gable-roofed servants’ house. It originally had three rooms, all sheathed inside with horizontal tongue-and-groove boarding. A small addition was added at its rear at a later date. Next to the servants’ house is the public alley which runs through the middle of this block. The W.G. Rogers house was converted to apartments in the 1940s, and has suffered some changes over the years. Part of the front porch was enclosed, and cut-glass transoms over the large front windows were removed and stored in the attic. The panelled pocket doors off the front stair hall were cut in order to insert conventional door jambs. A downstairs bathroom and two upstairs efficiency kitchens were added. Woodwork was painted and repainted, and plaster walls were allowed to crack and deteriorate. In the 1980s owner John Geer is restoring the residence. He has replaced modern windows, inserted in the front bay in recent years, with handcrafted replicas of the originals. He is beginning to strip woodwork and repair plaster, and has painted the wood-shingled exterior. Despite its years of deferred maintenance as rental property, the Rogers residence is surprisingly close to the way that its architect left it. Its room arrangement, expensive woodwork, and exuberant bathrooms are almost entirely as they were designed, as is its Dutch Colonial Revival exterior. The W.G. Rogers house is important to Charlotte as a rare early example of the architect’s art.
landmarkscommission.org 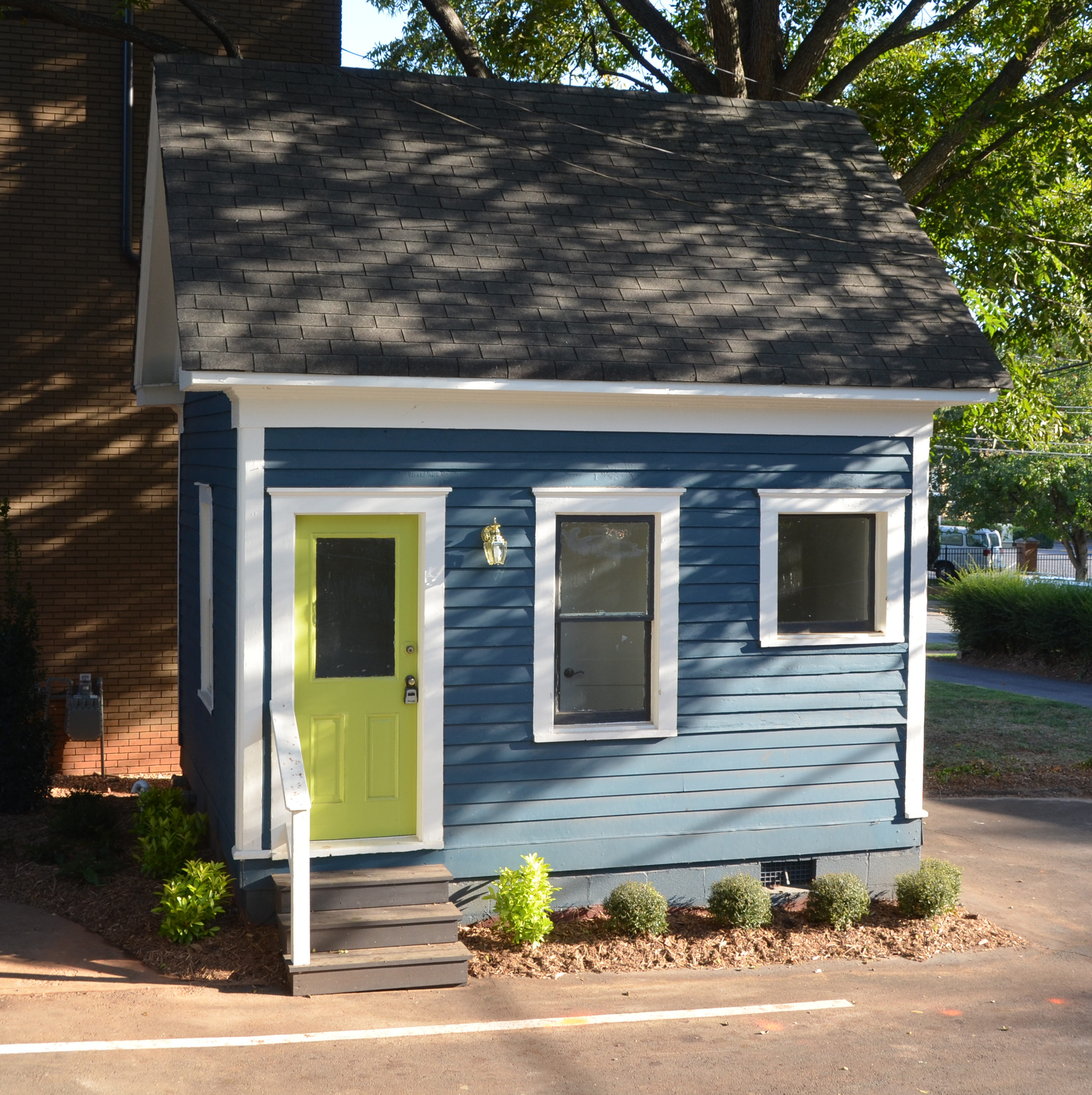